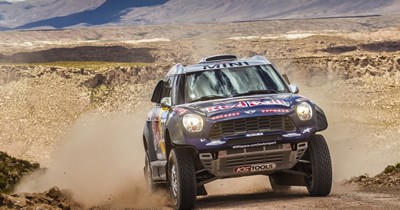 All race teams of the Top 13 ranking of this year’s Dakar rallye had been equipped with GKN’s propshafts and sideshafts. Dakar Rallye finished on the 17th January 2015 after more than 9,000 stage kilometres. The race started and ended in Buenos Aires, Argentina’s capital, where it had started for the first time in 2009.

The Dakar rallye is the world’s most famous long distance respectively desert rallye and the hardest rallye event in the world for human and materials. A true marathon race, with individual stages of more than 800 km distance most of them on desert grounds. Only the hardest drivers and absolutely top quality components in the race cars will manage such a demanding task. Over many years, driveline specialist GKN has been supplying a great number of participating race cars with sideshafts, propshafts and other components. In 2015, 70% of the Rallye cars had been equipped by GKN Motorsport’s technician’ with the latest driveshafts developments.

These applications are using GKN’s latest fixed joint generation SX, Countertrack™ which allows smaller packaging and also improved efficiency for the user. SX joints perform an efficiency improvement of up to 60% when compared to current Rzeppa fixed joints.

Using the know-how, experience and proof under extreme running conditions, sideshafts, propshafts and components of the same basic technologies are produced and remanufactured by GKN to supply the repair markets for passenger cars, 4WD, SUVs and light commercial vehicles. Replacement and repair parts for the independent aftermarket are well known under the brand names SPIDAN and LÖBRO.