You are here: Home1 / NEXUS Community News2 / Strong performance in a new look: MEYLE-HD control arm kit for BMW and... 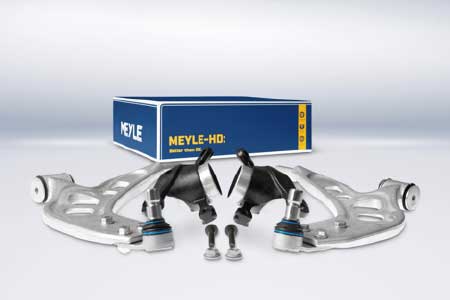 With the MEYLE-HD control arm for BMW and Mini, the Hamburg-based spare parts manufacturer MEYLE is presenting a technically improved aluminium control arm with a replaceable support joint and fastening material, which is currently only available from MEYLE in the aftermarket, compared to the OE part. The aluminium construction ensures that the control arms are very well protected against corrosion and are particularly durable. The weight advantage of almost 20% compared to the OE counterpart offers advantages along the entire logistics chain. The kit consists of both control arms (left and right), matching MEYLE-HD bushings with holders and the necessary fastening material. The MEYLE-HD control arm kit was first presented at Automechanika 2018 and is now available under the parts numbers 3160500135/HD and 3160500136/HD.

The MEYLE-HD kit with the aluminium control arms was developed by MEYLE engineers in Hamburg, Germany, and was accompanied and tested at every stage of the process – from the initial idea to production and comprehensive quality tests. The result: another high-quality repair solution from MEYLE that saves time and money in everyday activities at the workshop.

The kit scores with numerous advantages compared to its OE counterpart. Manufactured from high quality aluminium, it provides improved strength and durability of the part. The smooth surface, which is created from a single piece, is not only a visual highlight, but is also less susceptible to cracking. In addition, the control arms are very well protected against corrosion by the aluminium used. At 4.2 kilograms, the control arm is just under 20% lighter than OE. This not only reduces the total weight of the vehicle, but also lowers costs on day-to-day workshop and shipping activities, and saves required storage space. A further detail makes the control arm particularly sustainable: The MEYLE-HD ball joint, which is larger than the OE part, is individually replaceable and offers the advantage that not the complete control arm, but an individual component can be replaced selectively. Cost saving that benefit the workshop and driver alike.

The durability of the new MEYLE-HD control arm has been confirmed in an independent TÜV NORD test report commissioned by MEYLE. The MEYLE part was tested in comparison to the OE part.* In contrast to its OE counterpart, the MEYLE control arm survived the test under realistic load situations without damage:
“On the basis of the operational durability tests carried out, it was found that the MEYLE-HD control arms of type 3160500128/HD achieved more than twice the number of load cycles under the same dynamic loads and under identical test conditions as the triangular control arms by the vehicle manufacturer, and thus a significantly longer service life.”

Looking into the future of production: 3D-printed control arm as a showcase at the Automechanika 2018 event
As one of the leading manufacturers of automotive spare parts, MEYLE already uses its engineering and manufacturing know-how today to integrate potential future manufacturing and production processes into its development processes. At the Automechanika in Frankfurt, the company presented a fully functional and resilient 3D-printed prototype of the MEYLE-HD control arm for BMW applications. The result: a further enormous reduction in weight of almost 30% (more than 40% compared to OE) due to the saving of production material and at the same time potentially improved stability and load capacity of the control arm.

Valeo at Viva Technology: innovations and challenges in the fields of electric,...
Scroll to top
NEXUS - NEW SIGNATURE