You are here: Home1 / NEXUS Community News2 / Rapid growth continues as influx of new members sees the creation of Nexus... 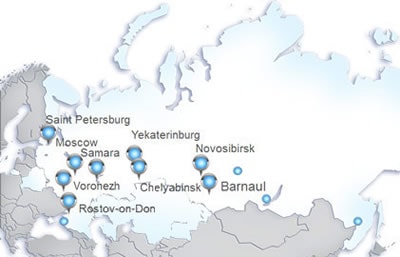 The new group is an expansion of the N Alliance, established in April 2014, and includes 14 major parts businesses with total sales volumes over €500 million.

The creation of Nexus Automotive Russia was announced at the organisation’s member and supplier conference in Moscow (27 August).

Nexus Automotive Russia also becomes a shareholder of N!, which recently achieved a global footprint with representation in 63 countries.

Gael Escribe, Chief Executive of N!, congratulated the team in Russia on its success and welcomed the new members to the group. He said: “To have brought about this powerful alliance of Russia’s leading parts distributors in such a short time is a fantastic achievement and a fine example of the entrepreneurial spirit that exists throughout Nexus Automotive International.

“The success of Nexus Automotive Russia in attracting new members is something we are finding in all regions, with companies recognising the benefits that N! can bring through the leverage of higher volumes and greater buying power.”

The new members of Nexus Automotive Russia are:

The automotive parts distributors who belonged to N Alliance and are continuing with the new group are Arkona, Indrive, AMK, ZipCars, AutoSouz, OOO ??????? and Talan.

N!, which has headquarters in Geneva and offices in Paris, Dubai, Sao Paulo and Johannesburg, was founded in February 2014 with the aim of bringing an innovative approach to the aftermarket. In June it achieved a group turnover over €5.0 billion 18 months ahead of plan.