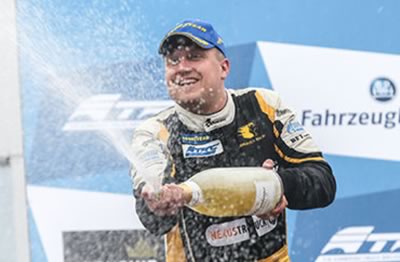 1st successful meeting for Lion Truck Racing on the Red Bull Ring in Austria. Anthony Janiec, the G-Energy truck driver has already signed a 2nd place. He goes on the podium in this first race weekend of the 2016 season !

This first round of the championship was held under changea- ble weather from the large sun Saturday in heavy rain Sunday, forcing the teams to change the settings, and the drivers to adapt driving style.

Saturday on a dry track the lap times of each driver were so close that overtaking was very difficult.

Following a good qualifying Sunday, Anthony was able to progress in the hierarchy and exceeded one by one its main rivals, to climb up to 2nd place and the podium! At the last race, the starting grid with reverse positions for the 8 leaders, Anthony started 7th on the G-Energy truck. With heavy rain, the track allowed only one possible line, and Anthony was not able to overtake as in the first race.

He scores 2 extra points and finished in 9th place of this last race.

In the European Championship, Anthony Janiec is 6th overall. Lion Truck Racing team is on the 3rd position of the team championship classification.

See you in two weeks for the 1st race of French championship in “Le Castellet” where Jean Claude Labadie will drive our second race truck.