You are here: Home1 / NEXUS News2 / PARTNERSHIP WITH JD.COM UNDERLINES NEXUS’ FOCUS ON DIGITALISATION AND E... 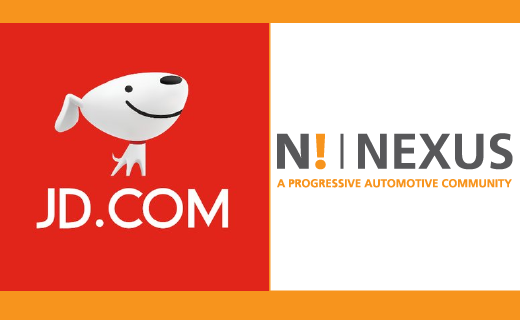 Global alliance NEXUS Automotive International (N!) has taken another big step forward in its strategy to invest in fast emerging markets and embrace the digital world by agreeing a partnership with leading online retailer JD.com.

The China-based e-commerce giant had an estimated turnover of $55.7 billion in 2017 and plans to have a B2B and B2C car parts business of more than $1 billion by 2021, contributed by more than 300 million active users.
JD.com operates around 210 warehouses in over 50 cities in China, where it has more than 5,000 delivery and pick-up stations in approximately 2,350 counties and districts. It has sold automotive products directly to consumers for several years and successfully entered the B2B market in 2017.
The contract with JD.com, plus the significant addition of leading ‘traditional’ Chinese distributor DZF to the NEXUS Community, underline NEXUS’ strong commitment to realising the potential in what is one of the biggest automotive markets in the world.

NEXUS CEO Gael Escribe said: “Through this agreement with JD.com we are further embracing the digital world, giving NEXUS a broader perspective with an indisputable strong e-commerce channel. JD.com is the perfect symbol demonstrating NEXUS’ focus on emerging markets, more specifically on China, and also our obsession to stimulate innovation.”
The agreement with NEXUS includes its B2B entity Qiguangxing (Beijing) Information and Technology and the B2C affiliate Jingdong Century (Beijing) Trading Company.

Gael also extended a warm welcome to DZF as the latest N! Member in China. DZF Trading (Guangzhou) Co Ltd is a national autoparts distributor dedicated to supplying OE and premium quality parts to its 146 shareholder customers in 30 provinces. DZF specialises in chassis and engine parts, electronics, thermos and cooling systems, and oil and other lubricants.

Gael said: “By developing digital sales channels, and extending our N! Membership, NEXUS is keeping its promise to build on the foundations we have established in the China/Asia region. Given its amplitude, this approach is not feasible in mature markets, where distribution channels are much more established and where such a partnership would create more turbulence than anything else”.