You are here: Home1 / NEXUS News2 / OUTSTANDING DEBUT FOR NEXUS AT AUTOMECHANIKA FRANKFURT 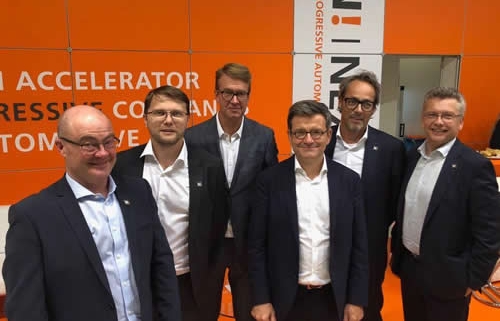 The first full appearance by NEXUS Automotive International at Automechanika Frankfurt has been declared a great success, generating high levels of interest throughout the five days. More than 116.000 visitors from 181 different countries have visited this most important parts show in the world.

NEXUS CEO Gael Escribe said: “This was our full debut as an exhibitor in Automechanika. The high number of delegates who visited our booth in Hall 4 on each of the five days, and the enthusiasm they showed for what we are doing, underlined this is the right place for the largest automotive community in the world to be exhibiting.

“It was simply stunning that over 500 N! members and N! suppliers came from all four corners of the earth to attend the reception and I extend a big ‘thank you’ to all of them.

“Also, we were delighted being asked to contribute to the important conferences explaining our role as a dynamic growth accelerator, particularly the exciting emerging markets. It was great to see that the whole N! Member Community was represented at the various suppliers’ events to which the N! Management team and N! Business Developers were participating.

“We will reflect on this, and the very many NEXUS initiatives now under way, when we welcome our progressive community to the N! Business Forum in Abu Dhabi next March 2019.

“Our ever-growing N! community is composed of 68+ original equipment (OE) global manufacturers and 119 N! members in more than 125 countries all over the world, representing a turnover of  more than 16B euro”.
Wherever N! members and suppliers run their aftermarket business in the world, NEXUS is there to support them.