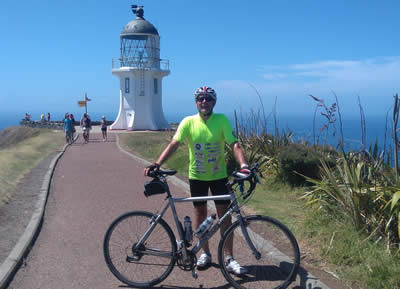 In December, Stuart Bayne, a sales manager at NGK Spark Plugs (UK), travelled from the southern tip of New Zealand to the far north of the country by bicycle to raise funds for the Down’s Syndrome Association (DSA) in the UK and a similar local organisation in New Zealand.

The trip was a tremendous success. Stuart’s fundraising sites on the Internet, which closed at the end of January, collected over 23,500 British

Having started early in December in New Zealand’s southern port town of Bluff, Stuart covered 2,108 kilometres in a good two and a half weeks during the Advent season. He overcame 14,000 altitude meters and finally reached his destination of Cape Reinga, the northernmost point of New Zealand’s North Island, on December 22nd.

It was Stuart’s second charity ride after a ride through Western Europe in 2015. His employer NGK Spark Plugs (UK) again participated as main sponsor. NGK Spark Plug Europe also supported the project and contributed 5,000 euros to the donation of more than 27,000 euros for the DSA, the only organisation in the UK focusing solely on all aspects of living successfully with Down’s Syndrome.