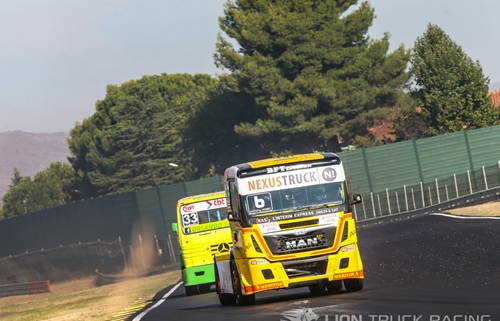 The 2018 FIA European Truck Racing Championship has ended with NEXUSTRUCK and the Lion Truck Racing team proving once again to be a winning formula on the track.

The main highlight was driver Anthony Janiec’s victory at Germany’s Nürburgring circuit in July, where 120,000 spectators saw him and the NEXUSTRUCK sponsored truck taking the checkered flag at the season’s biggest event.

The final race took place over the weekend of 6th and 7th October at the Jarama circuit in Madrid, with Janiec placed 12th overall for the year. He was also named French Champion for the second time.
Philippe Guyot, one of the NEXUSTRUCK project leaders, said: “The partnership between NEXUSTRUCK and Lion Truck Racing has once again proved to be a winner.
“This sponsorship is one of the many initiatives we have invested in over the past two years with the objective of building a winning Truck recipe at NEXUS, one that will be shared with the wider NEXUS Community during our first dedicated HD Business Forum in Abu Dhabi in March next year.”

New edition of the clutch catalog for Heavy Commercial Vehicles