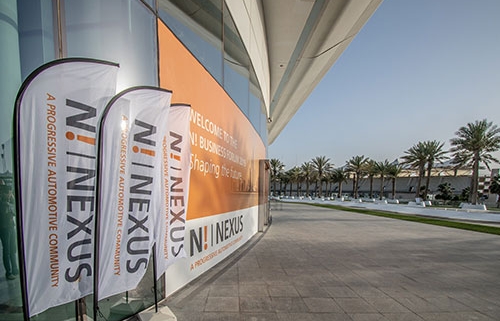 The 2019 NEXUS Business Forum took place in Abu Dhabi with the global alliance celebrating its 5th anniversary and announcing several key objectives for shaping the future of the aftermarket.
The Forum, which attracted more than 500 business leaders from around the world, kicked-off with reflections of the past five years, with N! members, suppliers and team members invited on stage to discuss the ‘DNA’ of NEXUS.

NEXUS chairman Akram Shahrour opened proceedings, remarking: “From a humble start five years ago in a small hotel in Geneva we launched NEXUS. Today NEXUS is successful, with a footprint in six continents. We have come a long way.”
Among the contributors were Gerson Prado of SK Automotive, Claudie Cahart, of ID Rechange, Peter Sephton, of founder member The Parts Alliance, Sam Wong, of G-Part, Dinesh of TVS Automobile Solutions, James Zhang, NEXUS Business Developer in China, and Alexandra Song and Yannick Decurnex, also of NEXUS Automotive International.
N!BF 2019 was hosted under the title ‘Shaping the Future’ and NEXUS CEO Gael Escribe revealed that over the next five years N! is to significantly scale-up its successful training and skills programme, declaring education as a ‘prime responsibility’ for the global alliance.

Also, while celebrating major success in countries such as Brazil and China, NEXUS plans to further deepen its focus on fast emerging markets where ‘the reservoir for growth is tremendous,’ said Gael.
He also highlighted the multi-channel approach being taken in China, where a partnership has been agreed with leading e-commerce company JD.Com. China could be considered an ‘aftermarket lab’ for the N! Community, such is the expected growth in this market.
Finally, Gael announced that NEXUS was exploring the possibility of becoming a semi-transactional organisation, with concrete initiatives being investigated with a number of progressive suppliers.
Gael said: “This was the biggest N!BF to date and, perhaps, the most exciting. To attract so many senior representatives from the most prestigious companies in the aftermarket shows how NEXUS has established itself as a serious player on the global stage.
“It is such a pleasure for the NEXUS team to be able to bring together so many N! members and suppliers from around the world and, working with the N! Community, be a driving force for change. That is why we define NEXUS not as an ITG but as an IBD – an international Business Driver.”

Significantly, N!BF 2019 also featured the first N!BF TRUCK event, dedicated to the Heavy Duty sector, with N! Heavy Duty Business Developer Janusz Zielinski announcing that N! Heavy Duty planned to be a global leader in the Truck market in the next three years.

He also revealed the launch of N! Truck Road Assistance, which will provide 24/7 support for truck drivers in case of an accident or breakdown, along with an N! Truck Road Assistance app.
The four days also saw the holding of thousands of speed-date business meetings for N! members and suppliers and the presentation of a number of awards:

See photos of the event here.

HELLA SHOWED THE FUTURE OF MOBILITY AT THE NAIAS IN DETROIT

Award: sensor bearing named innovation of the year by MAGNA
Scroll to top