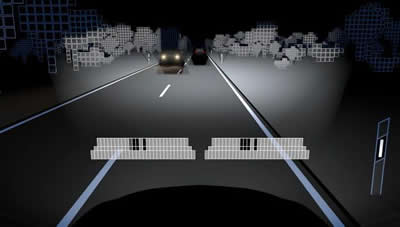 In early January, the new Mercedes-Benz E-Class celebrated making its debut at the Detroit Auto Show. Particular attention was paid to the world premiere of the MULTIBEAM LED headlamp with three-layered pixel light – a development in partnership between Daimler AG and the light and electronics expert HELLA. A total of 84 individual controllable LEDs per headlamp adjust the light distribution depending on the traffic, weather, and road conditions. The integrated adaptive High Beam Assistant Plus also ensures that high beam is used more frequently, therefore offering greater safety and comfort. Recently the trendsetting design of the headlamp won the Red Dot Award.

Unlike manually operated, static high beam systems, the MULTIBEAM LED headlamp even assists and supports the driver with high beam then when other vehicles are located in the field illuminated by the headlamps. The “Adaptive Highbeam“ function takes care of this, selectively masking the area that the other car is in from the light distribution within fractions of a second. This also works even if several vehicles are in the sensing area of the headlamps at the same time. This results in the vehicles themselves being masked, but the areas between them and next to them remain illuminated by the high beam. In this way the driver is under the impression of driving continuously with activated high beam, while other road users are not dazzled. The newly developed adverse weather light also reduces reflections on the oncoming lane when it is raining by specifically dimming individual LEDs in the low beam. Glare from illuminated road signs is also reduced by the system by reducing the brightness of individual LEDs. This means that the MULTIBEAM LED headlamp is making an important contribution towards road safety.

Apart from its high functionality, the second generation MULTIBEAM LED headlamp in the Mercedes-Benz E-Class with high-end lighting technology appears in a completely new design which won the prestigious Red Dot Award in the Product Design category 2016. The award also takes account of the two light guides which generate the direction indicators, daytime running lights and position lights in the beacon design typical of the Mercedes Benz brand. Additional visual effects are created by the blue Coming-Home light which welcomes the driver as soon as they open the car with the car key or their smartphone. The striking key component of the headlamp is the precision LED module which is framed by two light guide arms and surrounded by a blue turbine light.

The precision LED module installed, which is the result of another development achieved in partnership, has 84 LEDs arranged in three lines which can each be controlled individually. This allows the light pixels which can be controlled individually to create an extremely precise and highly variable light distribution in the entire area lit up by the high beam and for the first time also by the low beam without having to use mechanical actuator units. This means that the dynamic bend lighting being implemented purely by electronics is a world premiere. Here, variable dimming of individual pixels adapted to suit each situation allows the light focus in the particular setting to be shifted so that the driver’s attention is directed towards the course of the bend.

In the MULTIBEAM LED headlamp, the primary optics of the lens system positioned directly in front of the light source is made for the first time of a transparent silicone plastic specially developed for this project. In contrast to the thermoplastic plastics used until now, the material is resistant to the high energy radiation of LEDs. In addition to that, in contrast to glass, it can be machined much more precisely and thus meets the high demands made by the minimal tolerances in the manufacturing process.