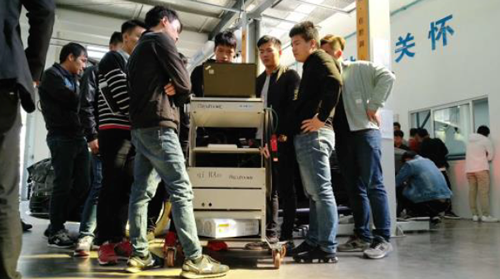 The NEXUS Academy training programme has gathered pace with events taking place in India, China and Argentina. Further sessions are planned for Slovenia and Ukraine, with the first dedicated NEXUS training centre also due to open later this month.

Two Academy sessions were held in Chennai, led by N! India member TVS Automobile Solutions. One was dedicated to executive directors of NEXUS members in the Asia Pacific region. The other was a Train the Trainer course for N! Asia Pacific member technical co-ordinators.
TVS is leading the Academy project in India and will launch the first NEXUS Academy Training Centre on 23rd November in a brand new building, which will also be used to train TVS employees.

The sessions in China were hosted in Shanghai with more than 40 workshop technicians taking part in two days training on diagnostics and clutches.
Meanwhile, some 15 executive directors and managers from Latin America participated in a three-day NEXUS Executive Seminar in Buenos Aires.
A middle management session in Ukraine will take place on the 20th and 21st November, while the session in Slovenia, 27th to 29th November, will see the participation of the European N! Members’ technical co-ordinator.
Thierry Mugnier, who is leading the Academy project for NEXUS, said: “The Academy programme is now firmly established as an important international educational resource.

“It is helping to raise skills, knowledge and understanding, not only across the N! Community but feeding into the automotive industry as delegates put into practice what they have learned.
“The calendar for 2019 is already set up with more initiatives all over the world, involving new regions and N! members. We will be releasing details before the end of the year.”

MEYLE presents prototype of front axle for drift vehicles at the Essen Motor...
Scroll to top