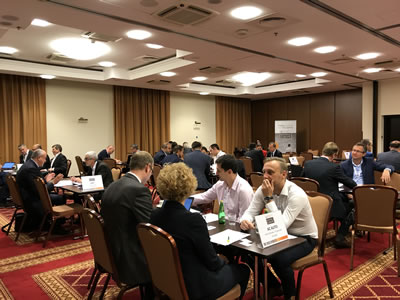 Held at the Radisson Blue Hotel on Wednesday and Thursday 20th and 21st September, it was one of the largest regional Connecting Days gatherings staged by NEXUS.

A plenary session on Day One, at which NEXUS CEO Gael Escribe shared the latest N! initiatives with delegates, was followed by an evening of networking.

Then, on Day Two, members and suppliers were able to explore potential future collaborations through a series of organised speed-date business meetings.

N!ACE has 14 members in the regional organisation, including leading autoparts distributors from Poland, Czech Republic, Slovakia, Russia, Ukraine and Lithuania.

Gael Escribe said: “I would like to thank our colleagues in N!ACE for making us feel so welcome and congratulate them on the progress they have made in this important region since the organisation was formed early this year.

“It is testament to their hard work and enthusiasm that N!ACE has attracted such leading players in the aftermarket, the most recent of which is Inter Team of Poland.”

So far this year N! Connecting Days have been held in Moscow, Sao Paulo, Dubai, Atlanta, Shanghai and now Gdansk. The next will be in Johannesburg, South Africa.

In October NEXUS will be making its full exhibition debut when the global alliance jointly hosts a stand at the Equip Auto show in Paris.

THE COUNTDOWN HAS STARTED!
Scroll to top