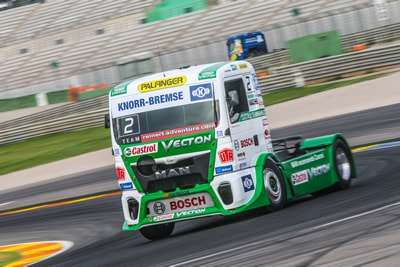 At this racing engine it’s all about the mixture. Genuine series-production parts with and without special motorsports modifications are used as well as custom-built parts. The commonrail

system features injectors specifically designed for high performances. A CP9 high-pressure pump, usually used for marine diesel engines, generates quite some pressure. The installed series-production ECU is known as EDC7. Whereas the basic software is also used in series production, the MAN and Bosch Motorsport software add-on is “pure racing.” It improves the performance adjusting the running characteristics. Also wear parts play an important role in the race truck: wiper blades, filters, batteries, and relais from Bosch make sure of this.

The European Truck Racing Championship 2015 is expected to become a very special season for the motorsport racers. For the first time in many years, truck racing will take place without manufacturer support.

Once again, the leading truck racers, such as Norbert Kiss, Jochen Hahn and Antonio Albacete, will compete for the title of the ETRC at the legendary circuit in the Eifel region. Several highlights concerning motorsports, show and the largest multi-day country festival in Europe are

already settled. Be prepared for a surprise! Watching mechanics work on the open paddock and at the exhibition park is definitively part of the ADAC Truck Grand Prix.