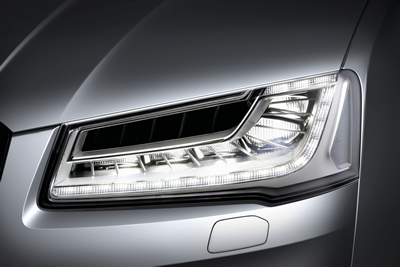 For more than 100 years, HELLA has been a pioneer in its field, continually developing and producing new lighting technology and electronics products. Over the years, the group has specialized in innovative lighting systems and vehicle electronics, becoming one of the market’s technological leaders.

Together with the various synergies between the group’s core fields of competence – «light,» «electronics,» and «aftermarket» – this extensive experience has formed the basis for many of the innovative products that have gone into series production at HELLA, such as the first full LED headlamp and the first xenon headlight in the world with a glare-free high beam.

Naturally, HELLA works constantly to maintain its position as a technological leader so that it can continue to offer «Technology with Vision» – in keeping with the company motto. Essential to this are the continuous further developments orchestrated by the group’s almost 6,000-strong R&D workforce all around the world, as well as its consistently high levels of capital expenditure.

These factors were the basis on which HELLA entered into a partnership with AUDI in order to produce the world’s first Matrix LED headlamp with glare-free high beam for the Audi A8. This function is at the heart of the new technology, allowing the high beam to be left on constantly without impairing the vision of drivers in oncoming traffic or vehicles traveling ahead.

The glare-free high beam system is activated automatically in non-urban areas if the driver has set the rotary light switch to «Automatic.» Oncoming traffic and vehicles ahead are detected by a camera. When this occurs, individual LEDs in the headlamp are switched off or dimmed in a fraction of a second, cutting «tunnel areas» out of the high beam.

The matrix technology used in the headlamp is also the first product that allows several of these tunnels to be opened at the same time. This happens, for example, in cases where there are multiple oncoming vehicles. While these vehicles are “blocked out”, the high beam continues to illuminate all the areas between the vehicles and to the left and right of them at full power. As soon as the camera’s and the driver’s fields of vision are clear of vehicles, the lighting system switches back to a full high beam.

In addition to specifically blocking out other vehicles, the light cone of the matrix high beam also adapts to the driving situation, for example when negotiating bends with the cornering light function. In such situations, the intensity of the light cone can be varied on the sides or focused on the middle of the road, as each of the LEDs is controlled individually. This significantly increases visibility when driving at night, and also reduces the danger to oncoming traffic.

HELLA has made this function technically possible by splitting the high beam into five reflectors, each of which has a 5-chip LED. By doing this, HELLA’s lighting experts have succeeded in creating the first system where each LED can be controlled individually on the 5-chip. This means that a total of 25 LEDs can be dimmed up or down as required for each headlamp. As such, the light cone can be controlled to a tremendously precise degree without the need for any pivoting mechanism, which at the same time allows for a huge number of variations in light distribution.

But it’s not just the safety functions on the headlamps for AUDI’s flagship that impress – their attractive design is equally breathtaking. Below the designer grille, which optically divides the headlamp into segments, is the world’s first dynamic indicator. The core element of this function comprises seven blocks of LEDs positioned behind one another, which light up in sequence with a series of 20-millisecond delays. After 150 milliseconds, all the LED segments are bright and illuminating with full intensity, giving the impression of a «dynamic direction indicator.»

As in the predecessor model, AUDI and HELLA have once again combined the functions of a direction indicator, daytime running light and position light in one optical system. Once again, the system demonstrates the advantages of LED technology: smaller package space, lower energy consumption, increased safety and a striking appearance. All in all, this gives the vehicle an impressive look to suit its high-class brand – at any time of day or night.