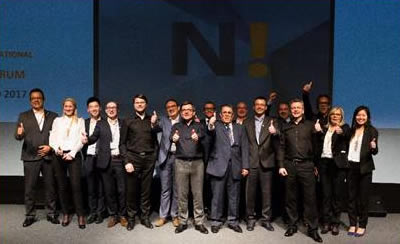 Community, innovation and entrepreneurship were celebrated at the 3rd annual NEXUS Business Forum which saw leaders from the global automotive aftermarket gather to discuss key issues facing the industry.

As well as hearing from 15 experts who are leaders in their field, from manufacturers to e-commerce entrepreneurs, they took part in 4,360 speed business meetings between N! members and approved suppliers.

Welcoming delegates from as far as Brazil, the United States, China and Japan, NEXUS CEO Gael Escribe revealed the consolidated turnover of the N! membership had hit €12.8 billion – a huge increase on the €7.2 billion announced in 2016.

However, while N! would continue to grow, Gael said N! will further develop its role as ‘an independent aftermarket activist’ built around its core values of Community, Innovation and Entrepreneurship.

This had already begun with the evolution of the Business Forum into a ‘think tank’ event, as well as providing fantastic opportunities for participants to cement relationships and do business.

Gael said: “The automotive aftermarket is ever-changing and the only certain thing is there will be more consolidation.

“But we are not going to be passive observers. As a dynamic organisation, N! moves quickly, developing value-creating propositions for our members and suppliers but also responding to the fast-evolving market.”

Describing the N! Community of members and suppliers as ‘a platinum asset’, he pledged to continue to increase year-on-year the amount of business contracted between them.

The achievements of high performers within the N! Community were also recognised. The N! Member of the Year was autoparts distributor VIACAR, from Greece, for achieving 38% growth in the past year. The trophy was presented by Gael Escribe and N! board member Fergus Reid to Kostas Daskarolis, Vice-President of VIACAR.

The N! Supplier of the Year was Continental for its innovative five-year guarantee on aftermarket drive products. The award was presented by N! Chairman Akram Shahrour to Christian Pfiz, General Manager Export Sales Automotive Aftermarket ContiTech.