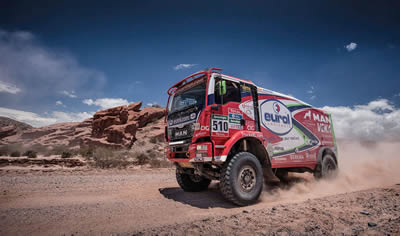 Dakar 2016 is over. Three Eurol teams finished the rally with a top ten ranking. Eurol driver Hans Stacey of the Eurol Veka MAN Rally Team (EVM team) finished fourth in the truck standings and won two stages. Right behind him in sixth place Pascal de Baar in the Mammoet Rallysport truck. Pascal drove his strongest rally ever with a stage win as a highlight. Peter Versluis of the EVM team won two stages and eventually finished ninth in the truck rankings.

Marcel Huigevoort, also part of the EVM team, completed his first Dakar in the truck at the eighteenth position. Steven Rotsaert of the Rotsaert Dakar Team, finished Dakar at the 20th position.Vick Versteijnen of the Top Trucks Dakar Team, ended his second Dakar adventure with a good 24th ranking.

Erik van Loon could not repeat his top performance from last year but was realistic. Small problems and a crash in the second week resulted in some time loss but Van Loon is satisfied with the thirteenth place. Tim Coronel signed for victory in the solo class at the cars.

Frans Verhoeven finished his eleventh Dakar Rally as best Dutchman with the nineteenth position. Robert van Pelt finished this year as 28th. Malle moto driver Jasper Riezebos was fourth in this class and finished overall at the 52nd position, the same position as last year when he debuted in Dakar.

Director Martijn Pfeiffer: “These men know how to perform in very harsh conditions. As their partner in lubricants, we are very proud of the results. The use of Eurol products in the world’s toughest rally is the ultimate proof of our quality. Because of the high speeds, heavy loads and high ambient temperatures, this is the perfect environment to develop and improve our products.”

Eurol is the only Dutch independent producer of lubricants and technical fluids and operates in more than 65 countries. As a total supplier, Eurol has a full-service approach with a complete product portfolio lubricants, additives, technical fluids, cleaning and maintenance products. Eurol therefore serves diverse segments such as automotive, transportation, the bicycle and motorcycle market, agricultural, earthmoving, industry and shipping. Eurol products carry approvals from leading vehicle manufacturers. The “Quality is in our nature” promise plays always a central role: With passion, Eurol is committed to give the perfect lubrication to vehicles and machine under all conditions.

Road salt – The great enemy of the condenser

Nexus Inside #6 available
Scroll to top