You are here: Home1 / NEXUS Community News2 / An electrifying combination: hybrid technology from Porsche and Bosch 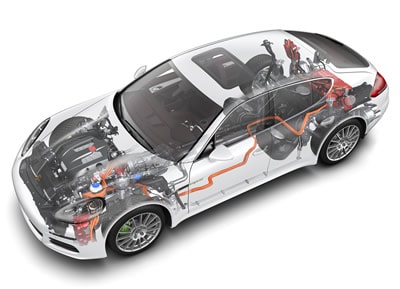 “Porsche and Bosch have teamed up to bring electrification to electrifying sports cars together. Electricity gives added driving pleasure and efficiency”, says Dr. Rolf Bulander, Chairman of the Business Sector Mobility Solutions at Bosch. For the three plug-in models made by Porsche, Bosch supplies the power electronics, the battery pack, the electric motors for the Cayenne and Panamera and the electric motor installed on the front axle of the 918 Spyder.

918 Spyder: a unique combination of performance and efficiency

The whole car was designed around the hybrid drive. The 918 Spyder thus highlights the potential of hybrid drives, i.e. the simultaneous increase in efficiency and performance, without one coming at the expense of the other. Thanks to the SMG 180/120 electric motor developed by Bosch, the Porsche 918 Spyder has an additional 210 kW (286 hp) of driving power. The electric motor on the front axle of the 918 Spyder delivers a torque of 210 Nm right from the start, while the motor on the rear axle delivers 375 Nm. The result is a total system output of 652 kW (887 hp) with a maximum torque of up to 1,280 Nm, allowing the 918 Spyder to accelerate from 0 to 100 km/h in a mere 2.6 seconds. The super sports car’s fuel consumption, on the other hand, is an amazing 3.1 litres per 100 km, making it more efficient in the NEDC test than most of today’s small cars.

The driving experience of a sports car combined with the consumption of a small car – the Porsche Cayenne S E-Hybrid and Panamera S E-Hybrid prove that these two are not contradictory to each other. The world’s first plug-in hybrid amongst the premium SUVs with a system output of 306 kW (416 hp) achieves an NEDC fuel consumption of just 3.4 l/100 km. The plug-in hybrid model of the Porsche Gran Turismo, which also has a system output of 306 kW (416 hp) stands out thanks to its weight advantage, rear-wheel drive and low drag, giving it a fuel consumption of just 3.1 l/100 km.

In the plug-in hybrid models of the Porsche Cayenne and Panamera, Bosch’s IMG-300 electric motor provides additional electrical propulsion. It gives a boost of up to 310 Nm of additional torque and provides 70 kW (95 hp) of additional power. The central interface between the electric motor and the battery is the INVCON 2.3 module made by Bosch. The power electronics are the control centre of the electric powertrain, because the system converts the direct current stored as energy in the battery into three-phase alternating current for the electric motor and vice versa. The traction battery stores the electricity in the powertrain. It is made up of prismatic cells with an energy capacity of 9.4 kilowatt hours in the Panamera S E-Hybrid and 10.8 kilowatt hours in the Cayenne S E-Hybrid that can be fully charged from a normal household power socket in less than four hours. Using a high current power supply, the charging time is almost halved to a good two hours.